There comes a time in ever parent’s life that they must let their children go in order for them to grow. That fateful day for me arrived today…

No, not my actual children they’re only 3 years old and 18 months old and I’m stuck with them for the rest of my god forsaken life. No, I’m talking about my other children Jerk David and Bernie. Much like a mother bird that pushes her chicks out of the nest to either fly or plummet to their tiny deaths today I packed up my tiny hops children and drove them to the literal greener pastures of my mom’s garden.

This is going to be their new home. We planted a plant on each side and then plan on putting the trellis in between them.

Jerk David in the ground and getting a well deserved drink. 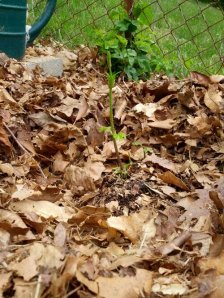 Snug as a fertilized bug

My mom thinks we did a good job.

Celebrated with some homemade donuts from the Farmer’s Market. 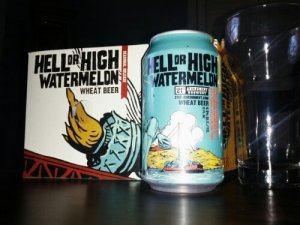 I have been a 21st Amendment Brewery fan since I first tasted their Fireside Chat seasonal brew. So when I read about their Hell or High Watermelon seasonal release I was both excited and intrigued.  Excited because I get to sample a new 21st Amendment beer and intrigued because I believe this is my first watermelon flavored beer. My feelings towards watermelon could fall into the same category as my feelings toward grapefruit. I have nothing against the fruit but minus the occasional summer BBQ I don’t really eat much of it.  I do like the flavor though (especially in gum and sour patch kids) and I am encouraged by my enjoyment of my first grapefruit beer so I gathered the troops during our lunch hour and made a special trip to Total Wine.

Now a normal person probably would have picked up just a six pack. Especially since I’ve never had this beer before there is always the risk that I’m not going to enjoy it. Luckily for me I am both a bit of a gambler and inherently lazy. I’m pretty sure I’m going to like this beer (with a strong chance of love) based on my love of the brewery and the last thing I want to do is plow through my sixer on Friday and have nothing for the rest of the weekend. So I did what any normal beer lover who hates going to the store on the weekends would do. I bought four sixers.

Pretty much on the drive home I started to worry that my enthusiasm got the better of me. I mean, like I mentioned earlier, I “like” watermelon but by no mean would I call my feelings for that fruit “love”.

Being the brave little solider that I am I forged ahead. I grabbed one of my beer beer drinkin’ glasses and cracked open my first watermelon beer.

My first test of course is the eye test:
“Holy crap it’s not pink” were actually the words I mumbled. Now, I don’t think I’ve ever actually seen a pink beer so I don’t know why I assumed it would be. I read that 21st Amendment brews this beer by brewing their wheat beer and adding the watermelon flavoring during second fermentation. So, instead of a pink beer i was presented with a beautiful looking wheat beer.

The second test for me is the smell test:
I was surprised that there was not an overwhelming watermelon aroma when I gave it a nice long sniff. Surprised but once again very appreciative.

Finally the taste test:
What I really enjoy about this beer is that the watermelon flavoring is very subtle. You almost don’t taste it right away and right before you’re able to think ‘Hey, where’s the…’ BAM! Watermelon flavoring all over those taste buds. I think with any fruit style beer there is a fear that in order to get the proper flavoring the beer is going to end up being overly sweet. That is not the case with Hell or High Watermelon. It’s a fantastic wheat beer with the obvious taste of watermelon but retains a very crisp body. This beer bellows drink me during your summer BBQ’s, pool parties, or just sitting on your deck on a Friday evening after a long week of work. 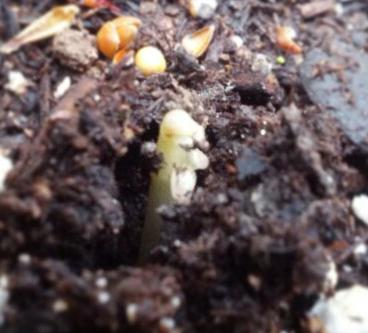 The hops plant in my backyard finally started to poke out. I shall name him Bernie to go with his brother Jerk David.

“You know that feeling you get when you’re at the dentist and you’re just beginning to come out of a nitrous oxide haze? That’s about how I felt this morning. Well that plus what I can only imagine what it must feel like to swallow a bag of cotton balls.” – Anonymous local Fairfax man.

Upon hearing this one might ask themselves how does a normal, intelligent, dashingly handsome thirty something wake up feeling this way? Well, apparently he drinks a billion beers the night before that’s how.

“The night started off how most awesome nights start off” said local anonymous Fairfax man with his wife asking him to fire up the grill. Now, apparently it is a well know fact that everyone in Fairfax County knows this particular local anonymous Fairfax man cannot light a grill without a beer in his hand. Numerous sources have quoted him making such boasts as “It is a scientific fact like evolution, black holes, and Ludicrous Speed“.

Aiding in the anonymous local Fairfax man’s plight is that he recently purchased a couple charcoal chimney starters making firing up the grill much less “hands on” allowing him to spend 30 seconds lighting the grill and the next 15-20 mins staring into the smoke while pounding beers.

The anonymous local Fairfax man started off his night with one of my newly brewed home brews but unfortunately they had only been in the fridge for a hour and were not that cold. Not surprisingly the anonymous local Fairfax man still drank the delicious home brew but was immediately forced to open another beer. For his second beer he decided to go with one of his favorite hefeweizens a Weihenstephaner. After a couple of Weihenwatch-a-call-its his neighbors arrived bringing gifts of Dogfish Raison d’Etre. Naturally not wanting to offend his generous neighbors he graciously enjoyed some Dogfish.

At some point the homebrew was cold enough or the anonymous local Fairfax man’s ability to gauge temperature was temporarily disabled. Either way he finished off the home brews and then downed a few Hoegaardens for good measures.

It was around this time frame that the anonymous local Fairfax man admits to things getting a little “fuzzy” and stated that he assumes there was some sort of dinner with children he thinks he remembers shouting? There definitely some Stella Artois and Dale’s Pale Ales “I think there was a baseball game?” the anonymous local Fairfax man mumbled while holding the bridge of his nose and forcefully closing his eyes like he was attempting to travel in time.

So in closing the anonymous local Fairfax man would like everyone reading this to know…drinking a billion beers is bad.

“Big things have small beginnings.” This line was spoken by that jerk android David from the movie “Prometheus”.

Today though I am using that same line to welcome my first hops vine as it pokes out of the dirt and says ‘hello’. I have planted three Cascade plants and I believe it is only appropriate to give them each a name.

So since this little fella is the first to greet us I shall call him “Jerk David”. 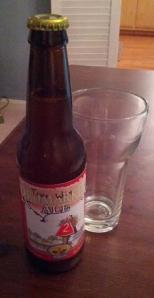 Without a doubt the best thing about about getting into home brewing with your friends is the chance to sample their home brews.  Today that is exactly what I got to do when my buddy Alex handed me one of his newest brews, True Wit.

Now, Alex is a developer and I believe that wires him to lean more toward functionality than style.  He is a guy that is not interested in labels, quirky names, or designer bottle caps.  No, he is a man that is chiefly concerned about what’s inside the bottle and I appreciate and thank him for that.

Essentially, I am saying he is not me who has a tendency to put the “cart before the horse” or in this case the “beer label before the beer”.

So, I am going to assume ‘True Wit’ is only the name of the type of beer and not the “name” of the beer… like say oh I don’t know Alex’s Truly Wit-tacular Home Brew or something to that effect.

That being said this is what I know/learned about True Wit beers.

So I got my handy dandy beer drinking glass, popped the bottle open, and gave it a nice slow pour.  Right away I noticed the cloudiness mentioned above.  Before the beer even touched my lips the first thing I smelled was the tartness of grapefruit.  This was a pleasant surprise as this is  my first beer with grapefruit.

Many years ago I learned to never judge a book by its cover or in this case a beer by his hasty slapped on piece of masking tape and sharpie scribble.  Alex’s True Wit stayed “true” to it’s roots in both appearance and flavor.  Extra bonus points for exposing me to my first grapefruit flavored beer.

Also, while I was researching True Wit beers I stumbled upon a YouTube review for the Belgium beer Wittekerke.  I am going to buy a sixer of Witterkerke strictly because of this gentleman.  Now I don’t know where this guy is from but until proven otherwise I am going to assume all Belgians are like this guy. 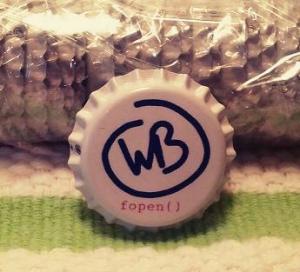 Besides costing twice as much and only getting half as many these are quite the bargain.

iHEARTbeer
Create a free website or blog at WordPress.com.