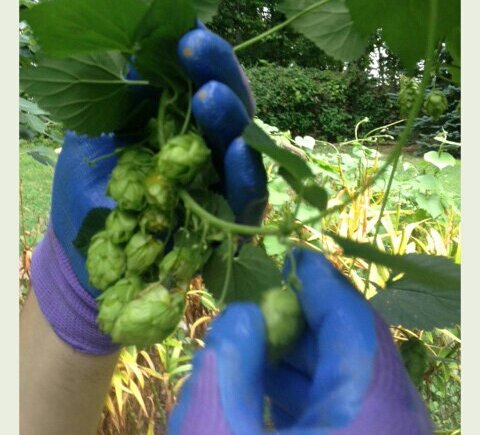 Finally the day has arrived. After months of care I am finally able to harvest my first batch of hops. I did some research on the best way to harvest hops and apparently there are two basic options. The first is to untangle the vine, cut it and take the whole thing down. Since I have three plants and they ended up very tangled up that was going to be a huge mess.  I opted for the second option which was to just pluck the cones off individually. 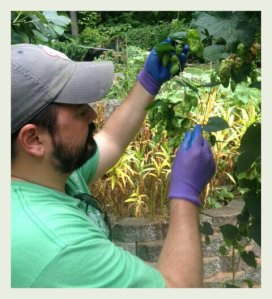 Everything I read about growing your own hops warned to not get my hops (hopes) up on my first harvest. They stated that the hops are spending a lot of their energy growing their roots so the harvest might be slim. Luckily for me I planted three plants so I was still able to fill a medium size bucket with cones. 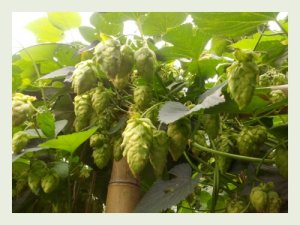 The bright purple gloves were because the vines have these tiny hooks in them that help them climb and can be a real irritation to the skin. Plus they look fabulous! 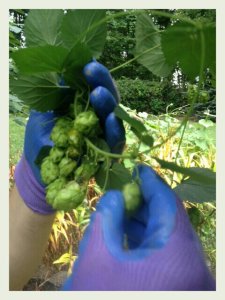 This is a close up of my bucket filled with cones. There isn’t a filter used on this picture they were a vibrant green and felt like the paper origami my sister and I would spend hours trying to create as kids. There was this one origami where you folded the paper to create a square-like ball. If done correctly there would be a little hole left open in the middle that you would blow air into to inflated the ball. The hops reminded me of that piece of origami. Only when I pressed my fingers together the cones would spring back into its original shape. Origami usually doesn’t do that. By far the best attribute of these cones was the aroma. I remember seeing a Samuel Adams commercial where the founder, Jim Koch, is shown diving his nose into hops as a bunch of Bavarian hops farmers stared at him like an American madman.

I understand why he did that. The smell is amazing and it infused me with a passion to start brewing right away. 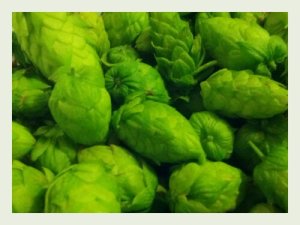 After harvesting the next step is to dry your hops. If not properly dried the cones can become moldy. I set up the ugliest drying rack in my laundry room. My original intention was to put together a well crafted drying rack that I would keep through the years and eventually pass down to my sons who would fight over it. Unfortunately that would not be the case today. I am not a handy guy. I went to Home Depot and some how purchased the wrong type of wood to go with the wrong type of nail. I did buy a staple gun but of course bought the wrong staples for them. Tim “The Toolman” Taylor would not have been impressed.

I was able to MacGuyver something up that was serviceable for drying my hops. I spread out the cones across the screen and set up a little fan underneath to get some air flow. I will need to turn the hops a couple times a day to ensure they dry properly and avoid any mold. The whole process should take a couple of day.  Once that is complete I will weigh and vacuum-seal the hops. then toss them into the freezer until I need to use them. If all these steps are done properly the hops can last for well over a year. 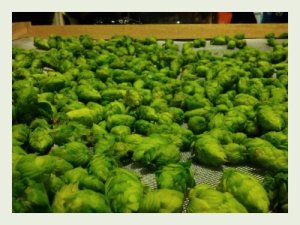 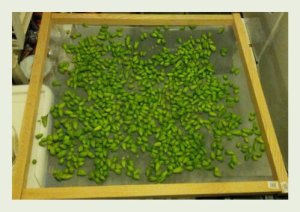 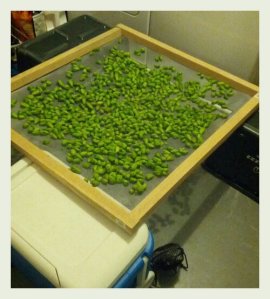 There were still plenty of hops left to harvest so I should be able to get at least one more batch before cutting the vines back. Now it’s time to decided what type of beer to brew with my hops!  I think I have to go with an IPA with extra hoppiness.